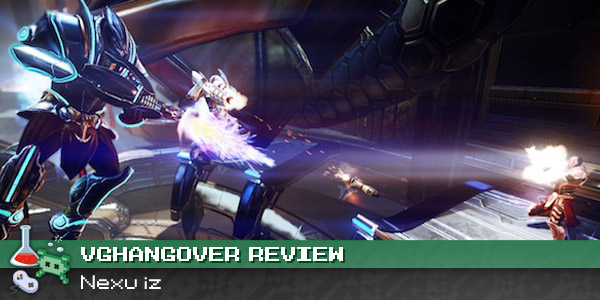 Nexuiz has all the trappings you’d hope to find in a twitch-based shooter. An array of interesting weapons, various power-ups, jump pads, and teleporters all make an appearance, but the most interesting addition is what Illfonic call “dynamic mutators”. These special power-ups provide a somewhat random twist on gameplay, if only for a limited amount of time. Some are beneficial enhancements like a higher jump, a stronger melee attack, or even jet packs, but they can also create effects that hamper your opponents, my favorite of which is one that foists inverted controls upon members of the other team. Though brief in duration, I felt like they were incredibly effective at spicing up the otherwise relatively straight-forward gameplay with some much-appreciated variety.

Gameplay consists of your standard issue team deathmatch or capture the flag, but there are enough maps to keep things feeling fresh. The combination of the game’s fast pace, scattered weapon pickups, and dynamic mutators keep things lively and interesting. The only major gripe I had with gameplay is that when a player abruptly quits a match, a new one is never brought in (neither human nor AI-controlled) and the balance can be pretty dramatically impacted.

While its gameplay and design aesthetics may be old school, the graphical fidelity of Nexuiz is decidedly new school. Powered by the gorgeous CryEngine 3, this is easily one of the best looking downloadable games I’ve seen. It’s always refreshing to play a game that makes use of the full spectrum of colors when so many other contemporary shooters feel mired in browns and grays.

I struggle to find negative things to say about Nexuiz in terms of gameplay and design, but the story is, well… another story. The narrative, if you can even call it that, is thin and just plain stupid. However, I’d be remiss to knock the game for it because in a game like this, there’s no need for a story. You’ve got a red team, you’ve got a blue team. They shoot each other. Everyone has a good time. The end.

The music of Nexuiz is top notch, but that’s to be expected when one of the studio’s co-founders is renowned musican Raphael Saadiq. Unfortunately, the same can’t be said for the sound effects. They’re adequate, but not much better than that. Something about them just lacked a certain aural thickness and I didn’t feel like they lived up to the game’s beautiful visuals or frenetic pacing. Nothing close to being a deal-breaker, but I simply felt the audio was slightly lacking.

The one major drawback is that there’s very little to do in the game offline, aside from playing against bots. That’s not really a slight against Illfonic, but more just the nature of the beast when it comes to downloadable online shooters. They live and die by community and whether Nexuiz’s will flourish or not remains to be seen.

Priced at only $10 (800 MS points), it’s easy for me to recommend Nexuiz to anybody with even a moderate level of interest in competitive online first-person shooters. If the concept has you intrigued, but you’re not totally sold on it, I’d suggest trying the demo and perhaps waiting for a week or two to see how things pan out. If, however, you fondly recall the days where the likes of Quake 3 Arena and Unreal Tournament were all the rage, this game is practically tailor-made for you.

Nexuiz was provided for review by THQ. It is initially available only on Xbox 360, but will be making it’s way to PC and PlayStation 3 in the future.