Play More Games: The More Things Change, The More they Stay the Same 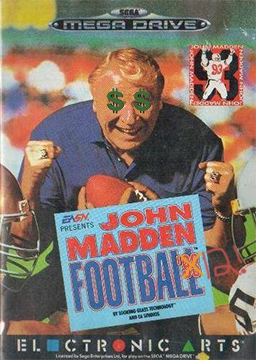 Ye$! Madden 2012 is finally here! I love thi$ game $o much! It i$ ab$olutely incredible ju$t how much the Madden $erie$ evolve$ from iteration to iteration! Madden football is amazing!!!* P.S. Money!

*None of the preceding text is true. In fact just apply “opposite day” rules to it.

It’s a pretty quiet week in terms of releases we’ll actually play here at VGH Industries. Obviously Madden 12 will end up selling about a trillion copies and that’s cool, it just isn’t our cup of tea. Early reviews have been pegging Madden 12 as a step back from previous versions, so I have no idea how EA’s monopoly on sports games is going to turn out for fans of their games in the future. Personally, I stopped playing the only sports series (EA’s NHL games) I’ve ever cared about years ago. Since the death of 2K’s sports games I wonder if EA has just gotten a little complacent in terms of pushing their sports franchises forward. Rather than turn this into a commentary on my thoughts on the current business practices of EA, let us move forward!

Tropico 4, sequel to Tropico 3, which was a sequel to Tropico 2 which was a sequel to Tropico 1, is out! As someone that absolutely adores city/world builder games I finally gave the Tropico series a try a few months ago when I picked up Tropico 3 on a Steam sale. It was stunningly gorgeous but the game play didn’t get its hooks into me like other games in this genre have in the past. Case in point (not really) I’ve spent like 300 hours with Civ 5, and apparently Civ 5 sucks! Also it is pretty much nothing like Tropico! I may just have to back and give er’ another go though, because the over the top humour in Tropico 3 was actually pretty great and I think I didn’t really grasp much of the game play which is what probably hindered my enjoyment a bit. Next time… I will complete the tutorials instead of just jumping into the main game!!! Rawr!

Releases for the Week of August 29th