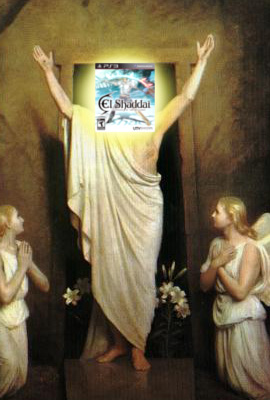 I don’t know what a Metatron is, but I think I want one.

It’s been a good Summer for people who like pretty games. Recent retail titles like Catherine, Shadows of the Damned and Alice: Madness Returns as well as downloadables like Outland, Bastion and From Dust have all boasted uniquely inspired art direction and high levels of visual polish. None of these hold a candle, however, to the insane amount of “pretty” on display is this week’s big new release, El Shaddai: Ascension of the Metatron.

Developed in Japan by Takeyasu Sawaki, one of the character designers on Devil May Cray and Okami, and released Stateside by Ignition Entertainment, the game attempts to do for Christian mythology (“El Shaddai” means “God Almighty” in Hebrew) what the God of War games did for Greek mythology. El Shaddai is adapted from the Book of Enoch in the Dead Sea Scrolls, apocryphal texts dating back to 150 B.C. that were omitted from the Old Testament.

On the surface, the story of Enoch (a living man permitted to reside in Heaven), sounds like classic quest-style gameplay: Enoch is charged by God to head to Earth and round up a group of seven fallen angels who have been inbreeding with the local wildlife (a.k.a. “the humans”). Your liaison with God while you’re on Earth is Lucifer, way before he had his little fallout out with upper management.

Instead of getting bogged down in the theology, the game instead focuses on a “simple to learn, hard to master” style of combat that includes single-button attacks, counters, blocks and parries. Early previews suggested that fans of Devil May Cry and Bayonetta-style games would be right at home. Beyond all of this, though, the visual appeal of the game is what drew me in: saturated colors, glowing Tron-like lines, and pencil sketch backgrounds with cell-shaded elements. Simply put, there isn’t a single other game out there that looks like El Shaddai. Reviews have been highly favorable, calling the game “visually inventive”, “a delight to play”, and “an absolute masterwork”.

I was initially concerned that this would be another case of style over substance (I’m looking at you, Alice) or, God forbid, a sly propaganda piece for the Republican Party, but the demo and reviews have eased my worries.  I’m dying to get my hands on it.

A few other releases on the VGH radar this week:

– Grasshopper Manufacture’s 2007 Wii release, No More Heroes, gets an HD up-rez and PlayStation Move support (in addition to other changes) in No More Heroes: Heroes’ Paradise for the PS3.

– Two of our recent XBLA crushes, From Dust and Bastion, will be available for download on the PC this week.

– Breath of Fire IV, the classic J-RPG from the PSOne days, is available in the PlayStation Store this week.

And now, a note on Space Pirates and Zombies from D.J.:

Back in the mid-nineties, I played the absolute crap out of a Mac game by Ambrosia Software called Escape Velocity. It was essentially an RPG that started you off as a spaceship pilot, warping commodities and VIPs around the galaxy and occasionally tangling with space pirates as you upgraded into progressively swankier ships. Eventually, you could buy huge battleships to fight aliens and put down (or lead) a rebel uprising against Earth. As Randy would say, it was freakin’ excellent.

Since then, I’ve been keeping an eye out for a successor to Escape Velocity, and I think Space Pirates and Zombies, or SPAZ, could be a contender. It’s got the whole space pirate and mercenary thing going, except instead of just your solitary ship, you can custom-build an entire fleet and swap between each ship in real time. There’s a massive galaxy to explore and conquer, weapons and technologies to research, and, as you might have inferred, zombies get involved at some point. Will it recapture the the innovation and magic of Escape Velocity? I’ll let you know.

Of course, you can always try it yourself. SPAZ is out on Steam this week, and there’s a very thorough demo available if you’re curious. It was developed over the last two years by Minmax Games, a team of two mere mortals, who I’m sure would love it if you played their game. If you see the appeal in the life of a space pirate, or you just want to support a cool indie developer, clear your schedule and give SPAZ a try.