After a nearly two-year hiatus, we’ve finally released a new show. Coincidentally, Randy and D.J. are excited about a potential new Rock Band, while Paul tries to remember the name of that game he played with a plastic guitar. Also: PS1 classics Suikoden I and II, The Marvellous Miss Take, Shadow of Mordor, and 1000 dead Mr. Game and Watches in Super Smash Bros.

As we covered in Episode 90, Rock Band may be over, but the massive music libraries we’ve built over the last six years are here to stay. I thought I’d share a list of my favorite songs to play–which was actually turned out to be quite difficult since my original PS3 died late last year and I still haven’t gotten around to redownloading all my songs onto the new one. But anyway, these are some of my personal picks for whenever I feel like picking up that plastic guitar. 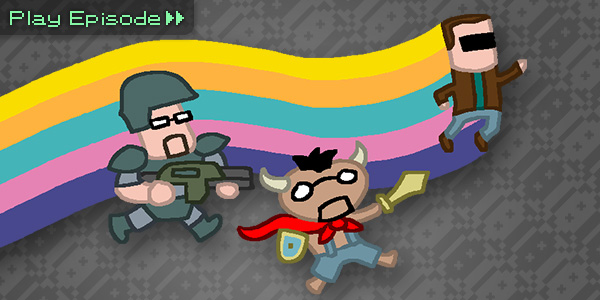 Does the end of Rock Band DLC mean the death of rhythm gaming? We look back on the life of the game that put plastic instruments in everyone’s living room and talk about why the genre isn’t dead yet. In the Hangover, we’re playing BIT.TRIP Presents… Runner2: Future Legend of Rhythm Alien, Castlevania: Lords of Shadow – Mirror of Fate, Ni no Kuni: Wrath of the White Witch, and recommending you avoid Aliens: Colonial Marines and The Last Remnant.