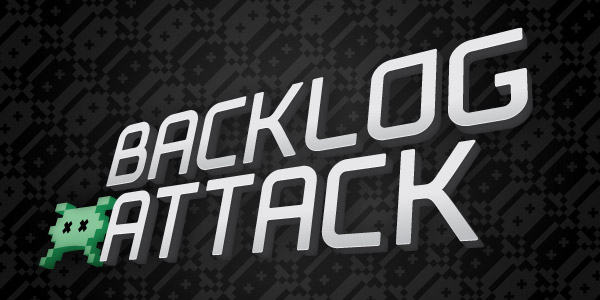 It’s back! As of episode #506, the Backlog Attack has returned, and we’re inviting you to play along!

All you have to do is play through your old, unfinished games for the rest of the month! As you complete each game, take a screenshot of the ending (or the last trophy/achievement), then share it with us on Twitter (don’t forget to add #BacklogAttack) or in the #backlog-attack channel on our Discord. Also, since this is the 10th Backlog Attack, we want you to include 10 words about the game—it could be a review, a memorable quote, or anything else, along as it’s longer than 9 words and shorter than 11!

At the end of the summer (which we’re declaring to be September 5th), we’ll choose a winner based on who we think has achieved the greatest feat of backloggery, and that person will receive the fall new release game of their choice!*

The winner will be judged based on several factors that aren’t just limited to the number of games you completed. For instance, maybe your backlog goal was just to get to the end of Death Stranding while rolling your eyes 10 times or less. That’s impressive! Maybe win-a-new-game-impressive!

To get started, just start playing your backlog games and send us the aforementioned screenshots up until the end of Sunday, September 5th. Make sure to follow us on Twitter, join the Discord, and listen to the show over the next few weeks since we’ll be giving our own progress updates and maybe even dropping some bonus challenges to help you secure your prize.

If you have any questions, feel free to drop us a line via Twitter or email and we’ll be happy to explain any of the rules. We think it’s simple enough, though: play your old games, win a new one! Now get to it!

* Prize will be the standard edition of the chosen game on your platform of choice. Release date delivery provided where available.