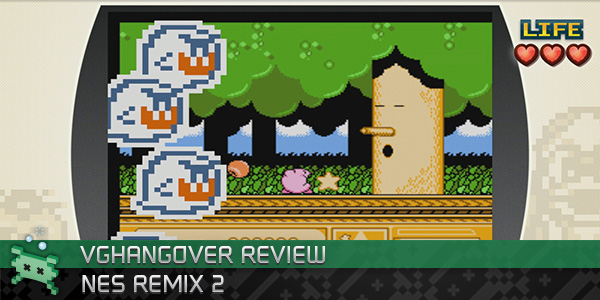 I really enjoyed the first NES Remix because it reintroduced me to many classic Nintendo games that I had played in the past and allowed me to experience a few that I had never tried. The addition of a nice handful of remixed stages that threw conventions out of the window made the overall experience feel much fresher.

Now NES Remix 2 is here and, while it could easily be dismissed as more of the same, it turns out that that’s not a bad thing at all. Nintendo boasts that there are over 160 challenges spread across the 12 games and remix zones. While I haven’t counted them myself, I do feel that the selection of games is, for the most part, pretty decent. Here’s the full list:

Each game brings plenty of challenges that start off fairly easy and get subsequently harder as you go on. The clever format teaches you the mechanic of how to play each title without it feeling like a tutorial, while cleverly preparing you for the increased difficulty that lies ahead. Dr. Mario, for example, features just six stages. You’ll start off by completing falling-block puzzles to eliminate a single “virus” on the game’s lowest speed setting. As you progress through the stages, the objectives ramp up and you’ll find yourself tasked with eliminating multiple viruses with a single capsule, reaching for a high score of 1,000 points, and ultimately eliminating four viruses using only nine capsules on an advanced speed setting.

Not every game is available from the start. You’ll unlock others by earning stars based on your performance, the amount of time taken and the number of lives used (echoing the common 1-3 star ratings that Angry Birds uses). For those obsessive gamers, it’s even possible to get a special 3-star “rainbow rating” if you complete a challenge quickly and flawlessly. In a similar vein, completionists will be happy to hear that there are 100 Miiverse stamps to collect, as well.

A few of my favorite remixes here include a Metroid stage where Samus runs automatically and you can only control when she jumps. Kid Icarus is turned into an auto-scrolling platformer that cleverly relies on the “walk off the side of the screen and appear on the other side” technique. Finally, Super Mario Bros. 3 has an entire level that you asks you not to be distracted by two Mario clones running alongside the real Mario.

NES Remix 2 doesn’t end there, folks: with the year of Luigi coming to a close we get to celebrate the green plumber one last time. Super Luigi Bros., a remix of the classic Super Mario Bros. with a brand new twist, is included as a bonus. Mario is gone but Luigi takes his place with a higher jump and extra running momentum in a “mirror mode” variation where you run right to left. It may sound like a simple change but it’s enough to make this feel like an entirely new game…well almost!

Still there’s more: for those that own both NES Remix and NES Remix 2, a further mode is unlocked that puts you up against the world in a 3-game race against the clock. As you’d expect, the better your score the higher you’ll place on the global leaderboard.

If you were concerned about NES games running at HD resolution, fear not: Remix 2 has awesome visual and audio presentation. Perfectionists will hopefully be pleased that the emulation appears to be very good—even the original graphical glitches and occasional slowdown are present and correct. The games aren’t fullscreen, of course, but there’s no horrid widescreen stretchiness to be found here. The games run inside a decorative HD border that creates a proper 4:3 ratio for these old titles. Whatever magical technology Nintendo used to make 256×240 titles look crisp and smooth on the big screen works astonishingly well.

Both NES Remix titles are great for those that already love these classic games, as well as those who are new to retro gaming. They provide both a chance to relive some fond memories while enjoying the remixed fun and a simple “one stop shop” to experience the origin of modern console gaming.

Both titles in my opinion are essential purchases for Wii U owners but, if you’re only in the market for one, NES Remix 2 has a more familiar selection of NES games. Grab that one!

Recommended if you like:
* Trials HD (if it was developed by Nintendo)
* Classic NES games
* Retro anything

Highlights:
* Perfect emulation
* Can be played off TV on the gamepad
* Bite-sized challenges

Lowlights:
* Final boss and endgame spoilers for some titles
* No multiplayer challenges
* Remixed stages aren’t as batshit crazy as I would like

This review is based on a retail copy of NES Remix 2 for the Wii U, provided by the publisher.