EXCLUSIVE! I wasn’t even on VGH33, so MY list of gift ideas for “obsessive gamers and pop-culture geeks” is ALL NEW CONTENT.  Now that I’ve pumped you up with an unnecessarily high level of hype, let’s get to the list. Should any of these great gifts pique your interest, just follow the links to find out more.

($10-$15)
Books are a form of entertainment that are printed on paper. You simply open the cover and begin reading the words that are printed on the page. Pretty radical concept, I know. Don’t worry though, you can ease into books by reading ones that are based on games! Some of my favorite games are the ones that (I think) have a strong narrative, so it makes sense that they’d be prime candidates for novelization. I don’t know much about the Uncharted book or the author, but I love the story in the games, so why not? If Uncharted isn’t quite your cup of tea, I’ve also heard good things about Dead Space: Martyr 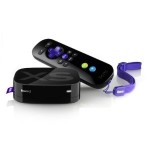 ($99)
When it comes to streaming media, we gamers are a lucky lot. Between the PS3 and the 360, we’ve got quite a few options available to us and their numbers are only continuing to grow – just today, Microsoft pushed a number of new media streaming apps to the Xbox 360. Having said that, there are still a few things that can’t be streamed on a game console yet, such as Amazon Instant Video. Also, being the devoted gamer that I am, I like having all my consoles hooked up to my big TV in my living room, which leaves me bedroom sad and lonely (in the streaming department, that is). This is where Roku comes in. The Roku devices offer all the heavy hitters like Netflix and Hulu Plus, but also stream from a variety of other Internet sources like TED, Pandora, Flickr, and Crackle. The devices range from $50 to $100, but the XS model at the high end even plays Angry Birds!

($50)
Confession: the only Metal Gear Solid game I’ve really played is Metal Gear Solid 4. There was a period of time where I had somewhat fallen out of love with games and it just happened to more or less coincide with the introduction of the first three titles in the series. I dabbled with Portable Ops a bit and even owned Peace Walker for a while (no joke – I bought Peace Walker the day before this very collection was announced.) This collection is perfect for somebody like me, though I guess I’d still have to grab the original MGS off of the Playstation Store to get the full experience.

($180)
Now that we’re working on reviews for VGH, the desire to try to do video reviews (have you seen Paul’s Skyrim video review yet?) is starting to gnaw at me, but I don’t really have any way to capture footage from console games. The Hauppauge HD-PVR lets you do just that. Hook up your 360, PS3, or Wii up to it via component cables and you can capture high-definition video of your gameplay footage. The device is *just* expensive enough to keep me at bay, but if money were no object, I’d definitely nab one of these. When I recently recorded a video walkthrough of the new Xbox dashboard update, I had to resort to just recording off-screen footage using my iPhone. With that in mind, I guess I might just settle for the Glif iPhone tripod mount. (Side note: I actually used a friend’s PS3 standing on it’s end with some books stacked on type as a makeshift tripod for that Xbox dashboard video.)

($170)
Up until just recently, I had little to no interest in buying a 3DS. Now that I keep hearing about Super Mario 3D Land and Mario Kart 7 all the time, I’m finding myself having to actively talk myself out of buying one. With the Circle Pad Pro attachment looming on the horizon, the 3DS’s relatively slow start sales-wise, and the gift card deals I keep seeing, I can’t help but think that Nintendo might already be working on a redesigned model of the device. But, I got some gift cards for Christmas…. and I’m about to go on a trip….. must resist urge to buy!

What do you think of my choices? Drop me a note in the comments and tell me! Also, keep an eye out for D.J.’s gift guide later in the week.  Happy Holidays!