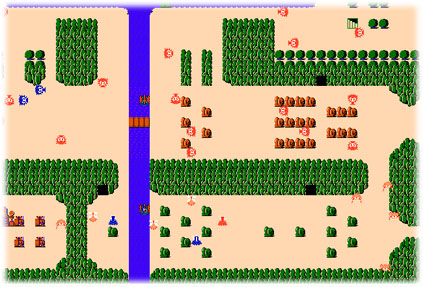 If you couldn’t tell from VGH #20, I like Xenoblade Chronicles a lot. The game starts you off in a peaceful little place called Colony 9 before rocketing you off on your adventure. You travel through a network of cramped caves and eventually through a small valley before you get to the Gaur Plains. As you’re travelling through this valley, the music stops. I am almost certain the developers did this on purpose because what happens next is you emerge from this ultra closed in silent space and the game hits you with a panning shot of this GIANT landscape and the incredible Gaur Plains track. I actually gasped when I first saw the sheer size of this area and the opening of Gaur Plains smacked me right in my face. This song gets me so pumped up that I’m actually going to add it to my workout soundtrack. I don’t know much about ACE+ (the composers), but I am definitely going to look for more of their work in the future!

Hey look, Nobuo Uematsu made this list. What a shocker. I have to admit, I didn’t fully appreciate FF9 the first time I played through it. Luckily I came to my senses and went through the game a couple years later and it now ranks among my favourite of the Final Fantasy series. My friends and I always joked about the weird “bloopy-ness” of this song, and it really is a funky style for an overworld theme. But you know what? It’s fun and whimsical and fits FF9 perfectly. It’s also extremely memorable all these years later so it gets major props in my books!

One of the most underrated rpgs of its generation, Valkyrie Profile took a very fresh approach to the traditional jrpg. Developed by tri-Ace, the game had an extremely interesting twist on Norse mythology. You play as Lenneth, a warrior maiden in the employ of Odin, king of Asgard. You are tasked with conscripting the souls of recently deceased warriors so that they may join the Asgardian army in time for the final battle at the end of the world (Ragnarok). You’re not quite a god but you certainly do have otherworldly powers. Rather than walk on the ground like a common human you take the high road and FLY. Sky Gate really captures that feeling of complete freedom with its high energy and quick beats. I would sometimes spend 10-15 minutes just aimlessly flying around the world map while this song would be blasting out of my stereo speakers on my 20″ tv. Oh the good old days~

Wild Arms doesn’t really stand up to the test of time, but the soundtrack is nothing short of great. This song is accused of being a complete rip off of “The Ecstacy of Gold” by Ennio Morricone from The Good, The Bad and The Ugly soundtrack. Well, it really is remarkable just how similar the songs are! Still, I can’t help but get wrapped up in the ol’ West vibe this song gives off. It’s a perfect song for this Western themed rpg series so thanks Michiko!

This track has Yoko Shimomura written all over it. She’s easily one of my favourite composers ever, consistently putting out beautiful and just plain FUN music over the last 15 years. I just love the funky beats and the fun guitar sounds in Colony 9, this song is just a perfect introduction to the Xenoblade world. Speaking of which, thanks to listening to this song, I now want to go play some more Xenoblade.

So, what are some of your favourite overworld themes? Obviously I can’t list all my personal favourites but I’d love to hear some of yours! Let me know in the comments!