If you’ve listened to Episode #11: Cartoon Animal Abuse, you’ll remember I talked about Southtown Arcade in San Francisco. Here are a few photos I took in case you were wondering what it looks like when you start up a brand new arcade! (Click for larger versions.) 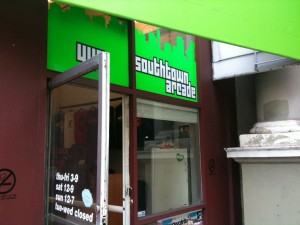 The entrance is unassuming. From across the street, you’d have no idea it’s filled with a horde of people beating the crap out of each other. (Virtually, of course.) 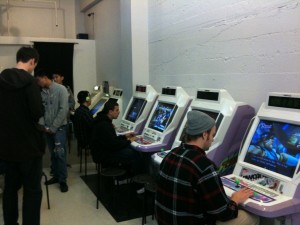 The inside. It’s a small space, but they’ve packed it wall-to-wall with Japanese-style arcade cabinets. (There’s another row of cabinets along the opposite wall which you can’t see.) Spectators observe players’ fighting skills while eagerly awaiting their turn. Get your quarter up! 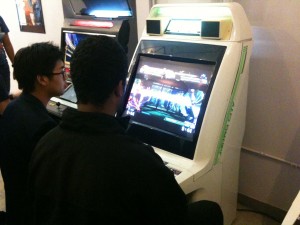 Two fighters go at it in Marvel vs. Capcom 3. Since MvC3 doesn’t have an official arcade version, this is actually a custom cabinet running the PlayStation 3 version. (Don’t worry, it’s got a traditional stick and buttons instead of a couple DualShocks.) 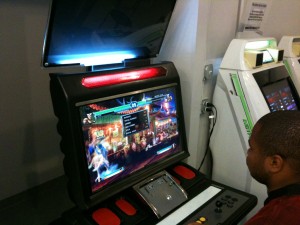 The hand-drawn sprites of The King of Fighters XIII look incredible on this screen. This player opted to test out his moves with a few sessions of training mode. 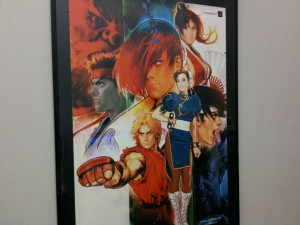 The Southtown guys prove they’re running a classy joint with this gorgeous poster of Shinkiro’s art from SVC Chaos. (Then they prove they’re true fighting game purists by not featuring an actual SVC Chaos machine.) A few more posters of fighting game art adorn the walls.

If you’re in or around San Francisco and you have even the slightest interest in arcade games, definitely check out Southtown Arcade! It’s easy to get advice from some of the players there if you’re a beginner, and if you’re not fighting-game-inclined, there are some other standbys like Metal Slug, Windjammers (a personal favorite), and the super-hardcore Tetris: The Grand Master 3: Terror Instinct. (Yes, that’s the real name.) They’ve also recently added Tekken 6: Bloodline Rebellion, so you can get your Phoenix Smasher on.