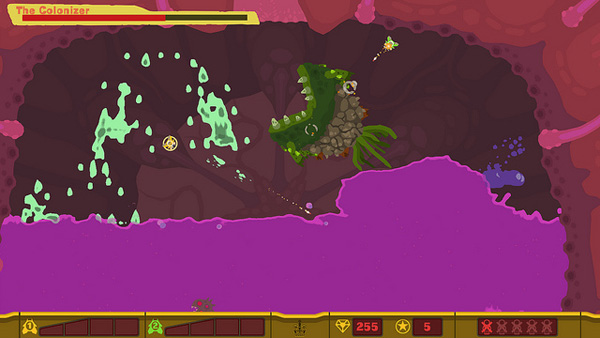 Q-Games’s brand new PSN game, PixelJunk Shooter 2, came out yesterday. If you haven’t played it yet, now’s your chance! We’re giving away a copy of the game for one lucky VGHangover fan. All you have to do is follow us on Twitter and tweet this message:

The contest will run until Monday, March 7th at 3PM Eastern, and we’ll randomly choose a winner around 5 PM. Make sure you’re following us and include the #vghangover tag in your tweet so we can find your contest entry!

This contest was made possible by VGH fan and veteran trophy collector, freakyzeeky! Here’s what he has to say about PixelJunk Shooter 2:

I really think this game is a definite improvement over it’s predecessor due to the slightly challenging nature of the main game, whereas the first game felt like a walk in the park in comparison. The online portion of the game also did not feel ‘tacked on’, it’s pretty beefy, with multiple unlocks of weaponry, shooting styles, spells, and the like to keep you occupied, and like the first game, the trophies aren’t really that hard, as you’ll unlock most of them as you play through the campaign, which can be played solo or local co-op. I say buy it, it’s easily one of my favorite PSN titles to come out this year, and worth it’s $9.99 price tag.

Thanks, freaky, and good luck to everyone who enters!