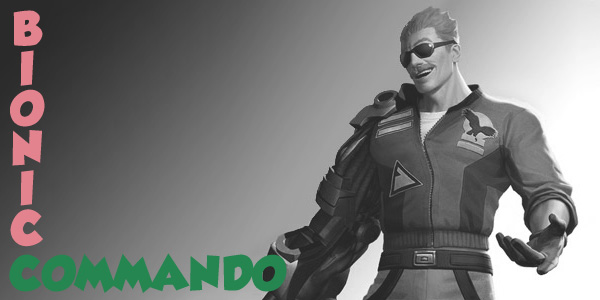 While I was putting together my list for our 2011 preview episode a few weeks ago, I was horrified to realize that most of the games I’m looking forward to this year are coming out in February. Well, it’s February now, so what can we expect?

Actually, it seems like everyone took this week off because there’s just a small handful of games coming out. But that’s OK, because one of them is Bionic Commando Rearmed 2, the all-new sequel to Grin’s remake of the NES classic platformer. Series fans are a little worried by hero Nathan “Rad” Spencer’s newfound ability to jump, but as long as this game delivers more of the sublime platforming and shooting action the series is known for, it’s all good. (There’s actually a trophy/achievement for finishing the game without jumping, so you purists will get a shiny, virtual medal at the end.) BCR2 also has 100% more mustache than the original.

It’s not exactly a game, but Harmonix is releasing The Clash’s classic London Calling for Rock Band 3 this week. That’s not the song—it’s the whole album! Some tracks will support Pro Guitar and Pro Bass modes, too. Check out the Rock Band blog for a list.

The UnderGarden comes to the PlayStation Network this week, after coming out for PC and XBLA a few months ago. In it, you control some goofy-looking creatures as they float around luminous caves and solve some physics-based puzzles. It’s a good choice if you just feel like relaxing on the couch instead of grabbing your M41A or whatever you’re using to murder extraterrestrials lately.

Finally, there’s a new map pack out for Call of Duty: Black Ops for the Xbox 360, featuring five new maps—one of which, I’m told, involves Nazi zombies. Because of Microsoft’s exclusivity agreement, PC and PS3 Call of Duty fans can expect these maps sometime in early 2018.

Are you looking forward to anything else coming out this week? Which London Calling song are you playing first, or are you just going to run through the whole album? Let us know in the comments!