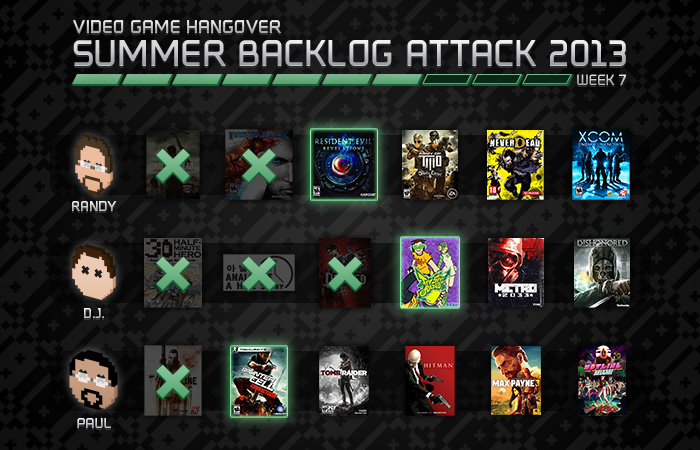 Three weeks left to go in our backlog challenge! Randy and I have gotten sidetracked a bit with Splinter Cell Blacklist, but we’re making good progress (or at least Randy is), so we’re giving ourselves a week off. Smart move??

RAGE! RAGE! RAGE! We’re letting off some steam over the things in games that make us mad. (Then we’re binge eating.) In the Hangover, we’re playing Splinter Cell Blacklist and Spec Ops: The Line. Also, your comments from Twitter on Viewer Mail, and the final weekly challenge in the Backlog Attack contest! 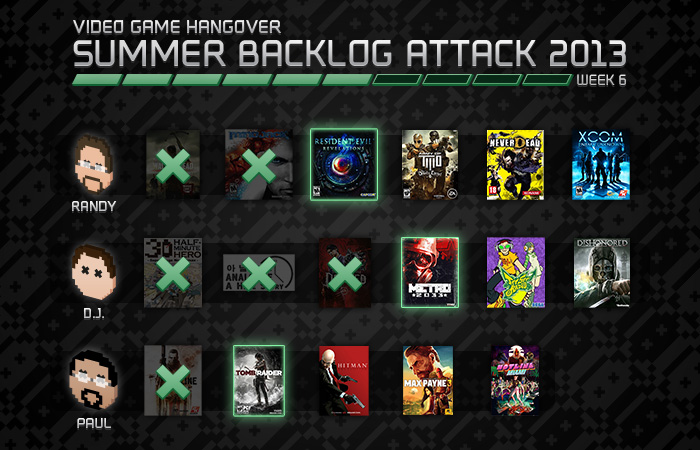 We’re officially past the halfway point! How are we doing?

Are you a game collector or just a hoarder? This week, we’re talking about the nuances of video game collecting and how well we’ve been able to resist the allure of that shiny, new collector’s edition.

In the Hangover, we’re playing Steamworld Dig, Brothers: Two Sons of Mothers, Divekick, and D.J. rants a little about Shadows of the Damned‘s Big Boner.

We’ve also got highlights from the ongoing Backlog Attack contest, plus your Viewer Mail comments!

We made more backlog progress this week: I started up Suda51/Shinji Mikami/Akira Yamaoka’s Shadows of the Damned and Paul ventured into the oft-overlookd Spec Ops:…

Just a quick update: We made some real progress last week. I finished Analogue: A Hate Story and Randy decided he’d had enough of The…

If you’ve been listening to the show for the last few weeks, you know we’ve been making an effort to finish a pile of our…

We dig into the controversy surrounding Vanillaware’s Dragon’s Crown this week. How often do a developer’s creative decisions (and possibly, their personalities) detract from your gaming experience?

We also make some progress in the Summer Backlog Attack: Randy gets into, Mindjack, the second on his list of triple-F titles, and D.J. explains why Analogue: A Hate Story maybe shouldn’t have been on his list in the first place. Meanwhile, Paul tries out the gravity-bending co-op of Ibb and Obb.

As always, we feature your comments from Twitter in Viewer Mail! And listen carefully as we announce a new, backlog-themed contest that you won’t want to miss!

Even though we’re already three weeks into the Summer Backlog Attack, it just didn’t feel official without the big board. So here it is! As…