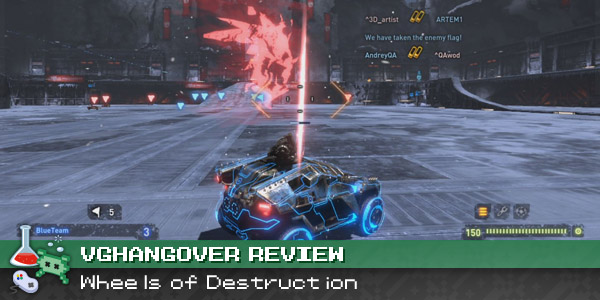 Have you ever found yourself playing Supersonic Acrobatic Rocket-Powered Battle-Cars and thinking, “this is fun, but what would really be great is if you took out all this soccer stuff and replaced it with guns and rockets”? No? Yeah, neither have I, but at first blush, that was the vibe I was getting from Wheels of Destruction: World Tour before actually getting my hands on it. Upon playing it, I found Wheels of Destruction felt a bit more like a vehicular game of Unreal Tournament accompanied by a control scheme I’d summarily label as “wonky”.

Factually speaking, Wheels of Destruction is a class-based vehicle combat game, powered by the ubiquitous Unreal Engine, and available exclusively on the PlayStation Network, from independent developer Gelid Games (whose website is currently comprised of, I shit you not, a mid-nineties style ‘Under Construction’ graphic).

In terms of modes, standard shooter fare is on offer here, with deathmatch, team deathmatch, and capture the flag all making an obligatory appearance. Up to twelve players can battle it out on five maps, each of which shares a name with a major real-world city, but share little else in terms of resemblance. Granted, this is a post-apocalyptic future, but the landmarks feel haphazardly thrown in to justify the maps’ names. Geographic concerns aside, I did actually like the map design, for the most part. There are ample opportunities for jumping off of ramps and weapon pickups are liberally spread about, but there are a handful of places that just seem not very well thought out (a ramp on one map that almost always lead to me crashing straight into a ledge comes to mind).

The most unique thing about Wheels of Destruction is probably its control scheme… and not in a good way either. Rather than use the left analog stick to steer and the right stick to aim, as I would have assumed it would work, the left stick pulls double duty and the right stick doesn’t do anything. Essentially, when you press the accelerator, your vehicle will drive in the direction that your reticle is facing. It’s a bit difficult to put into words, but it felt like a funky mashup between Halo’s Warthog and a standard driving game’s controls. It took me a handful of rounds to get the hang of it and even then, I only felt I had a cursory grasp on the controls. Thankfully, that wonkiness is somewhat offset by the fact that you cannot aim up or down and targeting is handled somewhat automatically, given that you’re close enough to an enemy and aiming in their general direction. The best way I can think of to describe it is “serviceable”. It gets the job done, but it stifles overall maneuverability and makes navigation a bit more cumbersome. Thankfully, there’s also a jump button and any time you jump, your vehicle will automatically right itself and face in the direction that you’re currently aiming. As annoying as it can sometimes be, you tend to forget the frustration, if only momentarily, when you’re flying through the air and performing sweet flips.

This being a heavily multiplayer-focused game, there is no story nor campaign to be had, but you can play offline against bots. When playing offline, you have the benefit of always having a full complement of players, though I did feel like the enemy AI was perhaps slightly too good at killing me. I was pleased with the performance of my computer-controlled buddies for the most part. Our more-machine-than-man team was able to win capture the flag and my AI teammates even scored a few captures themselves. Since I was playing in advance of the game’s release, the online community was pretty sparse, to say the least. The relatively few matches that I did play against actual human beings were pretty fun though. Gameplay can feel fast-paced and at times even a bit chaotic when you have a full room going. However, some of the maps have a bit too much ground to cover when only playing with 4-6 people. Only time will tell how much of a following the game will garner, but I can at least say that you’re better off talking a few friends into getting the game if you decide to pick it up.

As an Unreal Engine-powered game, Wheels of Destruction is no slouch in the graphical department. Vehicles, weapon pickups, effects, and environments are all crisply rendered, but things can feel a little bit bland on the whole. How much of that is due to a lack of variety or creativity versus how much of it was due to intentional design choices which establish the post-apocalyptic setting is hard to say.

Ultimately, Wheels of Destruction does some rad flips, but fails to stick the landing. It’s full of great ideas and even dares to be different in a few of ways. Unfortunately, it falls flat in some of those regards and many of the great ideas just aren’t that well-executed. If you’re a car combat fanatic, go ahead and kick the tires on this one – it’s a fairly low-risk endeavour at only $10. Everyone else should probably take a detour and route around the destruction.

* Twisted Metal, car combat in general
* Supersonic Acrobatic Rocket-Powered Battle-Cars, but could do without the soccer
* ramps, jumps, boosts

A copy of Wheels of Destruction was provided for review by the publisher.