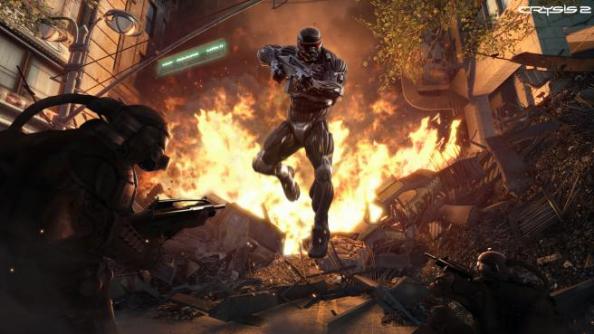 Crysis 2 review: Will it blend?

Much like a nanosuit-wearing badass’ ability to silently sneak up on enemies, Crysis 2 crept up on me, surprising me with a thoroughly entertaining campaign and fast-paced multiplayer modes that I feel compelled to keep coming back to. There isn’t anything necessarily ground-breaking here, but what is here is a perfect blend of ideas and concepts found in other popular modern shooters, with a dash of its own ingredients added for flavor.

Crysis 2 was an interesting proposition for me. Having never played the original, I wouldn’t exactly say that the sequel had been “on my radar” in the months leading up to its release. After a brief hands-on with the multiplayer beta, my interest level skyrocketed. I ultimately decided to buy the full game and I’ve been impressed overall with the experience.

In Crysis 2, you play the role of a soldier who suddenly finds himself strapped inside a sophisticated suit of armor, being targeted by a private military force, in the middle of a chaotic alien invasion on New York City. In short, you get to be a super-soldier badass and you get to fight both humans and aliens amidst a crumbling urban environment. It isn’t exactly the most original premise, but the inclusion of the “nanosuit” and the powers it bestows upon its wearer are what set Crysis 2 apart from the average shooter.

There isn’t anything necessarily ground-breaking here, but what is here is a perfect blend of ideas and concepts found in other popular modern shooters, with a dash of its own ingredients added for flavor.

The Crysis 2 campaign is quite fun to play, though I found the narrative itself to be pretty stilted. Sci-fi aficionados may appreciate some of the finer plot points, involving the alien invasion and the nanosuit, but I personally felt that while the narrative was interesting, it ultimately fell flat. Keep in mind that this is coming from somebody who has little to no clue what events unfolded in the original – those who played the first Crysis to its’ conclusion might find more to enjoy in the plot. Having said that, I did appreciate the storytelling structure of the game. In other words, I loved the way they told the story, but only kind of liked the story itself. I’m hesitant to draw these comparisons, because these games were far more successful with their narratives, but the narrative delivery – first-person perspective throughout, silent protagonist, detailed and well-realized worlds – actually reminded me a bit of both the Half-Life and Bioshock games. 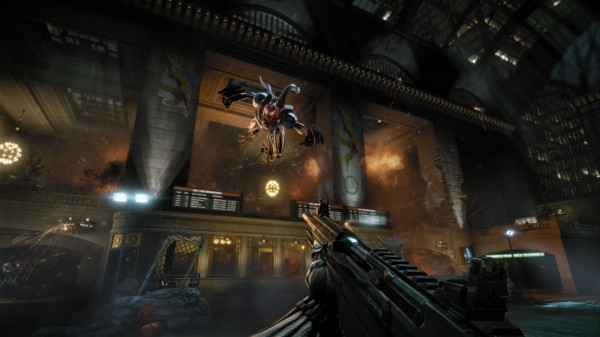 The overall feel and pacing of the campaign struck me as an amalgamation of Call of Duty and Halo, with a few sprinklings of other popular modern shooters. Crysis 2 features over-the-top, explosive set pieces and the occasional short vehicle sequence, much like those seen in a Call of Duty, but also incorporates the type of tactical firefights you’d find in Halo. The gunplay feels closely approximate to the modern Call of Duty games, with aiming down sights and punchy shooting, while the sci-fi elements of the game, the dynamic firefights, and the suit abilities – power jumping, armor, and cloaking – all reminded me of Halo. Although the progression of the campaign is linearly structured, enemy encounters can be handled in different ways, creating a palpable feeling of dynamism in the firefights. In this way, the game succeeds at catering to players with differing styles of play. You are able to approach situations in ways that fit your preferred play-style and the suit powers and upgrades highlight that. 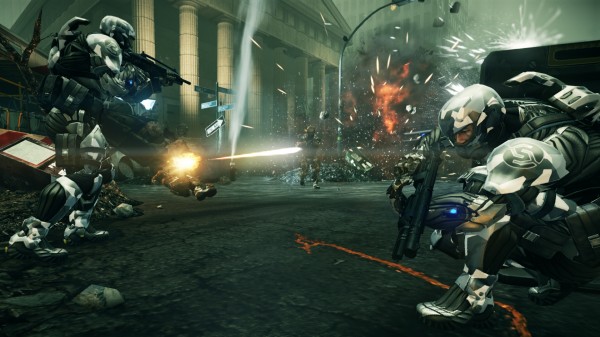 Much like the campaign, the multiplayer also felt to me like it brought together the best elements of Call of Duty and Halo. Fast-paced, satisfying gunplay reminiscent of Call of Duty, but also with an added element of increased mobility, which reminded me a bit of Halo and its floaty jumping. The suit allows you to sprint, slide and power jump but the game also features an automatic ledge-grab, which triggers anytime you jump toward a ledge (and it’s awesome). The persistent experience system borrows heavily from recent Call of Duty games, unlocking more guns, attachments, and suit ability enhancements as you level up. In addition to your main experience points for ranking up, you also independently level your stealth, armor, and power stats for your suit. This means that you unlock perks specific to each type of suit power, dependent upon how you tend to use them. There seem to be a good number of maps, all of which I felt were well-designed and had a good flow.

Although it is has no impact on gameplay, I also found that the “dog tag” system in multiplayer was a fun incentive to continue playing. The dog tags are simply titles and small graphics that you can choose to represent your online persona in Crysis 2. A handful are available at the start and many more can be unlocked by reaching certain milestones, some of which are within one match and some of which are tracked cumulatively. The developers used these as a way to sneak in a little humor, as evidenced by two of my favorites so far: the “codpiece” award, for most groin shots in a round and the “drunk and disorderly” medal, granted for playing after 11:30pm and placing in the bottom 3 for 3 consecutive rounds. Again, nothing mind-blowing, but they’re certainly entertaining and informative.

Technically, Crysis 2 succeeds on almost every level. I don’t often write about graphics, but it is worth noting that this game looks and sounds amazing. Other than an occasional dip in framerate, the game runs solidly on the PS3. The orchestral score is impressive and the sound effects are convincing.

Crysis 2 is not a perfect game, but it is a very, very good one. If you’re a fan of shooters and are looking for something new, I’d whole-heartedly recommend you give it a try. While it doesn’t ultimately do much that’s new or innovative, it combines a dynamic, action-packed campaign and a robust, competitive multiplayer mode into one excellent package.

Buy it on Amazon
Buy it on Origin

* Late in the game, admiring the devastated New York from a rooftop
* Sneaking around, picking off aliens one by one without being detected

Crysis 2 was purchased for review by Matt Kernan. Played the Playstation 3 version for approximately 15 hours (campaign completed on veteran difficulty (2 of 4) in around 9.5 hours, the rest spent playing multiplayer). For more info on how VGH approaches game reviews, please read our reviews philosophy.